The Fade is Anti-Infantry Assassin-class Alien. It is Bipedal and Humanoid-like in appearance and uses its Blink ability to teleport short distances across the map.

The Fade is a tough and versatile lifeform that has the unique ability to regenerate its health and energy at an increased rate in the field, thanks to its Metabolize and Advanced Metabolize abilities. Skilled Fades can severely punish a Marine team and will win the majority of 1v1 engagements however, similar to the Lerk, a Fade can be stopped quickly by a few well placed Shotgun rounds. 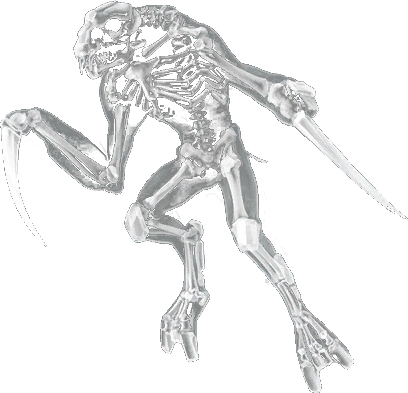 Fades rely on Blink to traverse the map they cannot run and are very vulnerable when not moving. The first thing a prospective Fade player must learn is how to use Blink to move effectively. Using Blink depletes energy very quickly, even with the Metabolize ability available. Rather keeping Blink activated, a Fade player should alternate between Blinking and Jumping, usually jumping twice for each short burst of Blink. Correctly timing this will result in a very high speed and maneuverability across the Map.

The primary attack of the Fade is the very effective Swipe. This attack can make short work of a Marine, especially at lower Armor levels. A Fade can blink in any direction, even up toward the ceiling, this makes you a far more difficult target than if you were to stay at ground level. When attacking as a Fade, a player should know 3 things. When to fight, when not to fight and when to run. As a general rule, You should fight when your enemy is a lone marine, you should not fight when outnumbered or not at full health and you should run as soon as your armor is depleted, if you are uncertain that your enemy is one swipe away from death. When striking a Marine with Swipe, try not to stand still. Constant movement will make you a hard target to hit.

The primary attack of the fade does a limited amount of damages to armored buildings. After Stab has been researched the Fade can deal more structure damage an can start harassing Extractors and Phase Gates alone.

The following images show all the variations of Fade camouflage (skins) that you may see in the game.