Eclipse Tower is in ruin after the Kharaa invasion. The battle was brought home in the name of “scientific research,” deemed necessary to protect our future. We thought the battle was over and all were safe, but we were wrong…

The Kharaa have escaped to the streets below Eclipse Tower and are already advancing throughout the district. Reinforcements have been called in as the streets, markets and clubs are evacuated. The war for our human existence rages on. We have to hurry to eliminate the threat; they’ve reached the Metro lines and can quickly spread out across the entire city.

As the fights continue into the tunnels of the Metro, shimmers of blue and white appear in the darkness. A faint shriek can be heard in the distance, it seems familiar but all the same different. What new terror Lerks in the darkness? 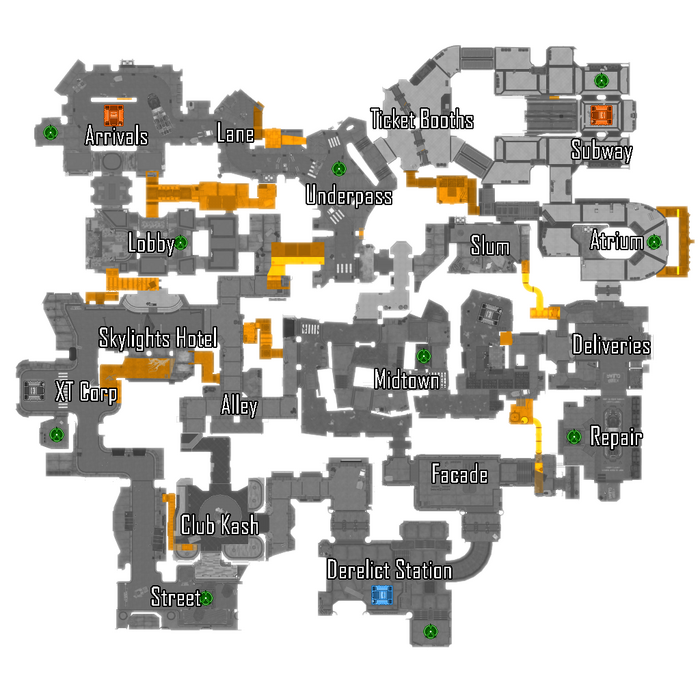 Metro is based on ns2_jambi, therefore most points of interest overlap with their equivalent on Jambi. Since Aliens will always start in either Subway or Arrivals, the main goal for Marines is to control, or at least deny Underpass, in order to stop the Alien Team to expand to the other one of the two. This is done the quickest through Facade and Midtown.
Conquering Atrium not only yields a viable Phase Gate location, but also the opportunity to kill any Hive in Subway with ARCs from an relatively easy to defend position.

On a Subway start the Aliens Team's first Priority is securing another Hive location by either Tunnel or fast-drop. The safer choice would be Arrivals, since it is further away from Derelict Station and thus harder to pressure for Marines early on. But if a Midtown Hive can be claimed, it grants significant map-control.
On an Arrivals start, the additional opportunity of expanding to XT Corp becomes viable. Though this location is easier to hold than Midtown early on, the payoff is significantly lower, since it yields much less map-control.

Metro has a secret room, and a hall of fame hidden within the secret room.