The Onos (plural: Onii[1]) is the largest and most costly Alien lifeform available. It is the ultimate weapon an Alien team can employ and is capable of causing huge destruction to Marines and their Structures.

The Onos is a gargantuan quadruped that appears as a cross between a Rhino and Gorilla, Despite its size, it is capable of reaching impressive speeds with its Charge ability and can deal significant damage to structures using Gore. When the Alien Commander researches Stomp, The Onos is also capable of sending out shockwaves that cause Marines that are unfortunate to be in its path to be knocked down, making them an easy target.

An Onos is a formidable and intimidating presence on the battlefield, however its size and cost also make it a valuable target for skilled or large groups of Marines who will go to great lengths to kill an Onos where possible.

An Onos should never venture into Enemy territory without a Gorge for support and a clear plan of escape. Marines with good map awareness will seek to cut off the escape routes of a fleeing Onos (a 'pinch') in order to deny the Alien team the use of this lifeform.

An Onos should use constant hit and run tactics, causing as much damage as possible or stopping Marine expansion in a certain area then retreating to heal as necessary. Ensure that Charge has been researched to assist in escaping from danger and never stray too far from somewhere you can heal.

A common mistake made by Rookies playing an Onos for the first time is the belief that you are indestructible. An Onos can be easily overcome by direct sustained fire and Marine Commanders have even been known to try and trap an Onos in a room by building a structure at the exits.

When Stomp is researched, it is likely this will become your primary attack. Using Stomp constantly against ground Marines will severely impede their progress and allow lower lifeforms to make easy kills. Stomp also disrupts the targeting of Sentries and detonates Mines.

The following images show all the variations of Onos camouflage (skins) that you may see in the game. 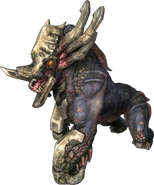