This manual will explain how to setup and use the WorkshopBackup for NS2 servers.

The goal of WSB is to provide a working backup for clients to download mods. Most often this need arises due to problems with the Steam Workshop.

The WSB is shipped with both the client and the server. Lets focus on the server. The shipped version is in the following path:

Running it from this path or a custom path produces the following situation. Note that the WSB is in a separate location compared to the location the server stores its mods. 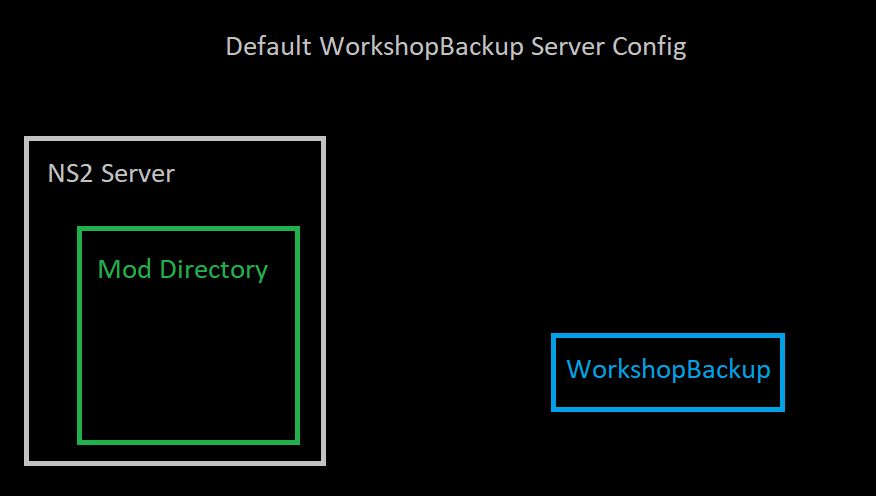 Having the default setup causes the following scenario when the client can not contact the Steam Workshop, it will download files from the Workshop Backup Server. 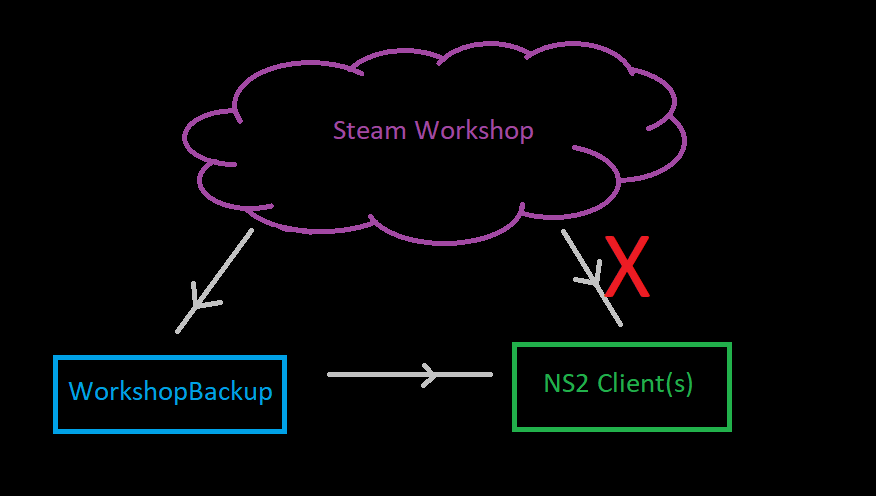 However this can cause a problem as shown in the next example. In this example the Steam Workshop is down for both the client and the Workshop Backup Server.

If the WBS did not download a requested mod in the past, it will not be able to retrieve the mod.

It can than not supply the mod to the client.

The client will than lack the required mod and connection to the gameserver will fail. 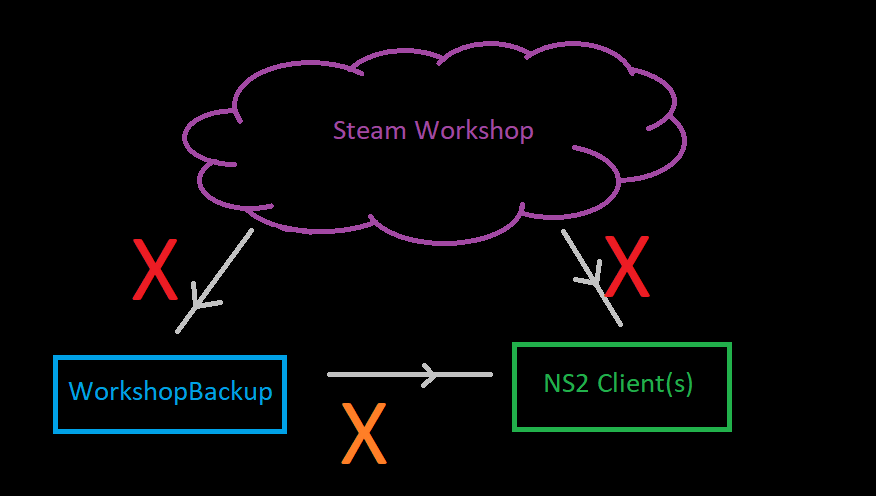 Thankfully the suggested or adviced setup will fix this key issue.

A much better location to run the WSB server from is from the Servers OWN mod directory.

The default directory is located in:

If you use the following server variable, you will have set a custom location for your NS2 server mods:

Running the WSB from the servers own mod directory will present you with the following situation: 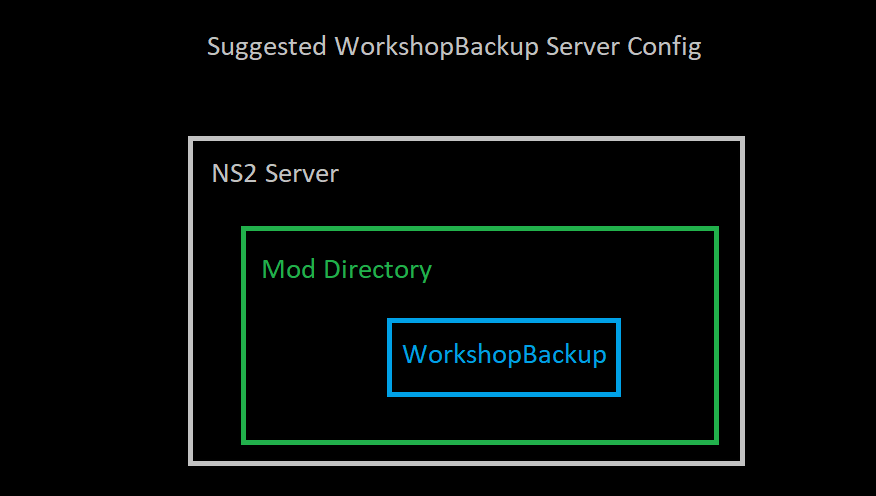 Having the suggested setup causes the following scenario if the client and the Workshop Backup Server both can not contact the Steam Workshop, as shown in the example below.

It will still download files from the Workshop Backup Server.

You need, read this well, NEED to use the latest version of WSB from Ghouls github, as well as running the Python script and NOT the executable.

Remember that if Steam Workshop is down you have no source for the Workshop Backup Server to download mods from.

The solution to this problem is using the server itself to be a source for mod downloads.

If we run the WSB out of the same directory as the server, it will zip any mod it comes across. Steam Workshop & WSB supply archive zip files of mods. So zipping existing mods, if using the same kind of zip, produces the same modfile for download.

If you have a zipped mod inside the WSB directory, you can use a weblink to download the mods zipfile through the browser.

Testing WSB on the NS2 Client[]

To test on the NS2 client enable verbose 1 in the console before connecting to your server.

The best testing is done from a external location.

You should see the following info in your console and client log.

Error if a mod has no valid Steam Workshop Download location

After this the really interesting stuff starts as shown below.

Use this information to troubleshoot your WSB.

Lets take the mod Shine Epsilon Beta as a example.

This means that any mod starting with m1bbfa39e is Shine Epsilon Beta.

This makes it so that you can have various zip files and folders of the same mod, but of different versions.

Installation of the Python version of WSB[]

First acquire the 3.4 version of Python for your OS:

Note this may contain only source code. You may need to look inthe Windows download section for prebuild installers.

I am blindly assuming the Linux Server Ops will just compile the latest 3.x.

The most simple is linking .py to start with the Python Launcher. After that just start the script.

However doing it like this may not be wishful if you wish to autostart it or use it with something like brainless panel.

You can do this by starting python with commands. A example where Python is installed on P: and the dedicated server on G:

Note that if your paths contain spaces, that you need to use " ".

After running the WSB once, a few files will be created.

A additional start will rename some files and create some new ones.

Setting up the actual NS2 server for WSB[]

If the mod_backup_servers variable is not present in ServerConfig.json, start and stop the server, it should generate the default variables.

In ServerConfig.json, set mod_backup_servers to the list of backup servers.

If you wish to make clients ignore Steam Workshop altogether set the following value to true in your ServerConfig.json.

The server should require zero maintenance, apart from possibly restarting the server every 6 month or so just to truncate the log files.

Mods are downloaded as clients submit requests for them - no need to manually update anything.

Old mods are cleared out about a week after the latest version comes out.

The server can be restarted at will - it will serve any existing file in the directory (that matches the m%x_%d pattern), so restarting does not mean it will have to re-download files from steam.

Stopping the server and removing all files from the directory will reset the server - possibly useful if there are too many old mods that noone uses anymore.

The log-err.txt contains both errors and a record of all download requests.

The server should be very resource-conservative. As it will only serve server-side mods, and clients will only connect to the server if they don't have the mod already, the only time it will see significant use is

Note that while most mods weighs in at the few-kb size, maps range in size from 5 to 50Mb.

The server acts as a very restricted web server. It ONLY services requests for files whose pattern is "/m{mod-id-in-hex}_{timestamp/version-in-decimal}.zip".

If a file matching that pattern is present, it is served via the usual http-protocol.

If the request does not match the pattern, it is 404'ed.

If the request DOES match the pattern, but there is no such file, a 202 (request accepted, come back later) is returned and a request is sent to the steam-downloader part of the server.

The steam downloader will (in the background) try to download information about the given mod_id. Once steam answers, the response is analysed and stored away (persisted in the content.json file), and if the mod should be served, downloaded and stored in the current directory.

To avoid spamming steam too much, the server keeps track of invalid requests so multiple requests to outdated, unserved or otherwise invalid mods are denied efficiently.